Always in Service: A THANK YOU to Our EMS Personnel That's the theme of the 2017 EMS Week, which comes to a close on Saturday. But before it's over, we wanted to take a moment to recognize the EMS professionals who whole-heartedly serve their communities, putting their jobs above leisure, family, and self.

The Pulsara team is blessed to have some of the most talented, dedicated, and experienced EMS personnel on our own staff. "Always in Service" describes no one better than this crew who split their time serving in EMS roles while also giving their all to Pulsara and our clients ... all while balancing their own passions. Check out some of the things that make these team members unique -- as well as their SUPER impressive EMS track records -- below.

SCOTT -- Scott loves hockey and is currently the reigning champion in Pulsara's contest for most enviable beard (You can't tell in the picture below, but TRUST US! It's a work of art).

Scott's impressive medical service includes positions as a combat medic, a corpsman with the Naval Reserves, a firefighter and EMT, a paramedic, a nurse, and most recently as the EMS coordinator at St. Elizabeth Healthcare. Thank you for your service, Scott!

BRANDON -- Brandon does a killer Australian accent -- he's been known to carry on an entire dinner conversation with a stranger in the accent -- which is no surprise considering he's been to the land down under twice to work with our amazing clients there.

Brandon started his EMS career 13 years ago as a firefighter and and shortly after became a flight paramedic. He has also worked as an EMS educator, an ICU charge nurse, and a flight nurse. Brandon maintains double board certifications in critical care and flight and recently obtained his B.S. in Nursing at Texas A&M University. Thanks for your dedication to EMS, Brandon! KRIS -- Hoo boy, where to begin?? Kris holds the Pulsara world record for most amazing socks. He moonlights as a DJ. He's ridiculously photogenic (see below). Basically the coolest kid on the block!

Kris has worked as a firefighter captain, paramedic, and ambulance service director, and continues his practice as a critical care helicopter flight paramedic covering rural Montana and Yellowstone National Park. And, In 1999, Kris created paramedic.com and, in 1997, co-founded EMS1.com (now the largest online paramedic resource). Thanks for all of your contributions, Kris! WES -- Wes Wood is a beach-loving, motorcycle-riding, golfing machine, who has over 30 years in EMS experience! He now travels the country for Pulsara, helping other clinicians understand how to use the platform.

Wes began his career in emergency services at the ripe old age of 15 as a first responder and fire fighter. After advancing through the ranks of emergency services training, he served as a paramedic in North Carolina. Wes later worked in several emergency rooms as a nurse, eventually becoming the director of two facilities, one of which was among the busiest in North Carolina. Thanks for your commitment to EMS, Wes! WES -- Wes Gilbert is a Texan-turned-Montanan who is passionate about first responder fitness and inspires awe in the whole Pulsara team as he routinely gets his insanely intense workouts done before work or at lunch, in the time it takes most of us to respond to a single email.

Wes worked in EMS as a Firefighter/Paramedic in East Texas for 10 years, after which he transitioned into a Clinical Informatics Analyst role for a large hospital enterprise for 4 more years before joining the Pulsara team. Thanks for your fresh approach to EMS, Wes! SHANE -- Shane has pipes! The man can out-karaoke anyone who dares challenge him. He's also quite fond of ENORMOUS dogs, maintains a seriously impressive farm (which he calls a garden -- it's a FARM!) in all of his spare time (ha! We don't know how he does it.) and can give a Pulsara demo in his sleep -- flawlessly.

Shane started his medical career in the ICU, and then moved to the ED and is certified in both CCRN & CEN. Shane flew all over the Lone Star State for 4 years as a flight nurse, and has his CFRN as well. Shane also worked as the Chest Pain Coordinator at Trinity Mother Frances Health System for 2 years, obtaining his CCPC (Certified Chest Pain Coordinator). Thank you for your leadership, Shane! We are beyond lucky to have these folks on our team! Sincere THANK YOU from all of us at Pulsara to Scott, Wes W., Wes G., Shane, Kris, Brandon, and all of you who serve in EMS. 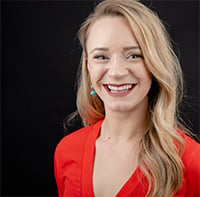 Hannah is Pulsara's Senior Director of Marketing. She holds a master's degree in Neuroscience and a bachelor's degree in Psychology, which she uses to analyze and interpret the peculiar behaviors of the rest of the Pulsara marketing team.